The enhancement of human cognitive processes has long been a focus of scientific discovery. Progress in technology and research, has lead to non-invasive brain stimulation therapies playing increasingly important roles in improving neuroplasticity, brain performance, and neuromodulation.

What is non-invasive brain stimulation?

Non-invasive brain stimulation is defined as the delivery of energy through the cranium to the brain, to stimulate or improve its activity.

Over the past decade, new discoveries in neuroscience have led to a better understanding of the brain’s mechanisms and how different forms of energy can influence changes within the brain.

In this blogpost, the different energy sources used for brain stimulation will be examined along with their applications.

What are the different types of brain stimulation technologies?

Transcranial direct stimulation involves the use of weak currents of electricity delivered via electrodes on the head. It was originally developed to help patients with brain injuries or neuropsychiatric conditions such as major depressive disorder.

tDCS works by applying a positive (anodal) or negative (cathodal) current via electrodes to an area. During stimulation, current flows between the electrodes, passing through the brain to complete the circuit. The position of the anode and cathode electrodes on the head is used to set how current flows to specific brain regions.[1]

tDCS devices delivers low electric current to the scalp through electrodes placed on the head. A fixed current between 1 and 2 mA is typically applied. There is usually a control panel that allows you to program the device (to set the duration and intensity of stimulation). 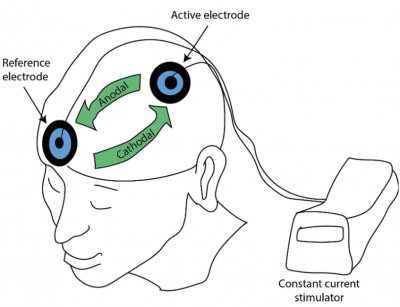 A standard tDCS set-up uses a target and a reference electrode. First, the desired locations of where the electrodes will be positioned are determined. Saline solution, conductive paste or EEG gel are used to affix the electrodes to the scalp and distribute the current. The participant’s hair should be parted to ensure good contact between scalp and electrode. Electrodes are then attached to the stimulator using wires connected to corresponding anodal/cathodal ports.

At present, the mechanisms of TMS is not well understood. What is known is the current produced is above the threshold needed to make a neuron activate. When the coil is placed on the motor cortex, TMS makes the cells in the motor cortex active, enough to make a finger twitch.

Some studies have proposed the activation of neurotransmitter systems as a working mechanistic model.[9]

TMS equipment usually consists of a small electromagnetic coil and a computer which controls the frequency and power output. 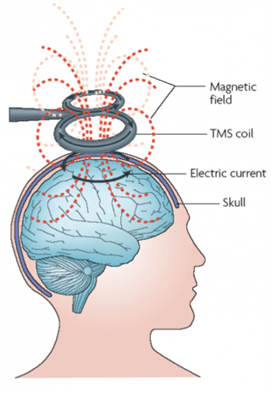 Figure 2: TMS machines deliver electrical currents into the brain through induction from an electromagnetic coil.

Brain photobiomodulation (PBM) utilizes red to near-infrared (NIR) photons to stimulate the cytochrome c oxidase enzyme of the mitochondrial respiratory chain. Cytochrome c oxidase is receptive to light energy. This results in an increase in ATP synthesis, leading to the generation of more cellular energy. Additionally, photon absorption by ion channels results in release of Ca2+ which leads to the activation of transcription factors and gene expression. The absorption of red to NIR photons by mitochondria CCO triggers a series of cellular and physiological effects occur in the brain, also known as CCO upregulation.

The metabolic effects of PBM in the elderly have been shown to increase cerebral blood flow (CBF) due to the increase in CCO activity, leading to an increase in brain oxygenation. Photobiomodulation of the prefrontal cortex was able to increase the resting-state EEG alpha, beta and gamma power, and more efficient prefrontal fMRI response, facilitating cognitive processing in the elderly. [18] Additionally, photobiomodulation of the Default Mode Network (DMN) has also been shown to increase cerebral perfusion due to an increase in mitochondrial activity. [19]

In addition to the above findings, PBM may be a promising strategy for improving aging brains because of its anti-inflammatory effects. [20, 21]

Brain PBM leads to a reduction in neuronal excitotoxicity

In 2022, researchers from the University of Alberta published a multi-layered study investigating the way that living cells, cellular structures, and components such as microtubules and tubulin respond to near-infrared photobiomodulation (NIR PBM) using the Vielight Neuro Alpha.

Their study showed that PBM balances excitatory stimulation with inhibition, indicating that PBM may reduce excitotoxicity which is relevant to the maintenance of a healthy brain. This study also showed that low-intensity PBM upregulates mitochondrial potential and improves physiological brain functions impaired due to trauma or neurodegeneration. [22]

Aging is accompanied by changes in tissue structure, often resulting in functional decline. The blood vessels within the brain are no exception. As one ages, a decrease in blood flow to the brain is caused by a loss of cerebral vascularity, leading to cognitive decline when neurons cannot obtain sufficient oxygen.[23] Brain photobiomodulation has also been shown to increase cerebral blood flow due to the vasodilation that occurs after the release of nitric oxide.[24] Brain photobiomodulation devices consist of either headsets or helmets that position LEDs or laser diodes over the cranium.

The diodes need to generate enough power with proper wavelengths to penetrate the skull. There’s little utility in generating a lot of total power if none of it reaches the brain.

There are several aspects of brain photobiomodulation devices that users need to be aware of.

Figure 5 Penetration of Neuro LEDs through the cranium and nasal area.

Brain photobiomodulation devices should be designed for maximum transmission of light energy safely without generating heat.

The accepted wavelength range for brain photobiomodulation is within the NIR to far infrared range.

The near infrared (NIR) range in the electromagnetic spectrum has a theoretical maximum depth of penetration in tissue. 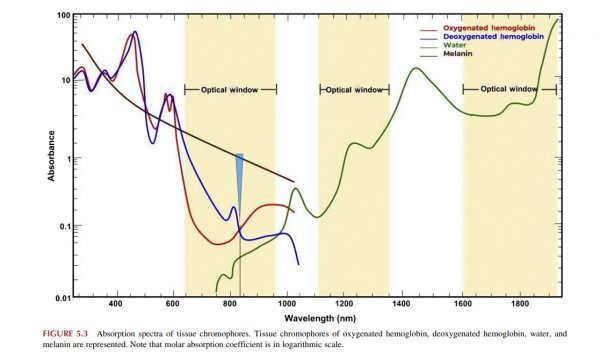 
Visible light (wavelength 400 to 700 nm) is substantially absorbed by hemoglobin and other organic matter. On the other hand, absorption by water increases at wavelengths longer than near infrared light (1000+nm). This implies that wavelengths outside of the near-infrared window cannot easily penetrate deeply through tissue.