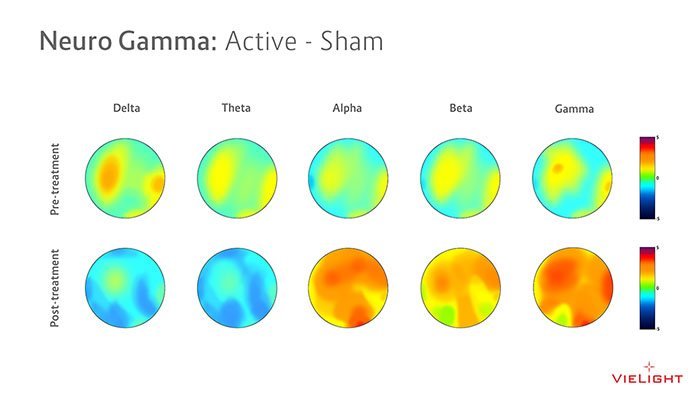 In this randomized double-blind study, the Vielight Neuro Gamma was applied to 20 human subjects with healthy brains. Using near infrared light emitting diodes (LED), pulsing at 40 Hz and focusing on the default mode network, this study presented a novel discovery in how the brain responds to PBM. The investigation demonstrated that the power spectrum in the high frequency brain waves of alpha, beta and gamma was significantly increased, whereas the low frequency spectrum of delta and theta was decreased. The recalibration in the power spectrum indicates improved attention and cognition. There were also greater global inhibition and higher connectivity in the high frequency bands. These are features of a brain with better functions and organization.

A Few Words from the Vielight Founder

Co-investigator, Dr. Lew Lim, Founder of Vielight, added: “Over the years, I have been asked these three questions repeatedly by scientists and members of the public alike. The findings of this study are of huge significance in the use of the transcranial and intranasal Vielight devices. Until this study was published in this high-impact, peer-reviewed journal, we never had a sufficiently solid ground for skeptics to accept, and we could only offer hypothetical answers. Now we have proof for the nay-sayers and strong evidence for the early adopters of our technology to feel that their confidence in us is justified. Furthermore, this landmark study makes transcranial-intranasal photobiomodulation (PBM) a reliable and effective technology for non-invasive brain stimulation method. Thus, the Vielight Neuro can be used both at home and in clinics as an easy-to-use, portable device that does not require any special training.

We can now move on to expand our research on the potential of transcranial PBM as well as on how it can be used
to treat brain conditions, perhaps, even boost human capabilities. In this respect, our research agenda is already looking
very busy”.

The primary site for Vielight’s pivotal Alzheimer clinical trial, St. Michael’s Hospital in Toronto, has recruited its first participants during the last week of May 2019. This is a major milestone for Vielight after two years of intense preparation.

The trial will be a randomized, placebo-controlled study involving 228 subjects with moderate to severe cognitive impairments due to Alzheimer’s Disease.
This pivotal trial will be conducted across North America. St. Michael’s Hospital in Toronto, Canada is the first among the eight sites that will carry out the study. The protocol of the study has been reviewed by the U.S. Food and Drug Administration (FDA) and Health Canada.

The device in investigation, the Vielight Neuro RX Gamma, directs near infrared light (NIR) to selected regions of the brain. The NIR is pulsing at the gamma rate of 40 Hz. Subject to regulatory clearance, the device will be indicated for Alzheimer patients with moderate to severe impairment. This is the group that demands the most care with the largest economic burden.

This clinical trial is timely against the backdrop of many unsuccessful attempts by pharmaceutical and device companies to demonstrate acceptable efficacy and safety to address the disease. Currently, no other modality, that is in a clinical trial, is expected to demonstrate clinical outcomes within the time anticipated for the Vielight study to be completed.

Recently published studies have shed more light on the potential of the Neuro RX Gamma to modify the pathology of Alzheimer’s Disease. These studies presented findings in clinical assessments and functional magnetic resonance imaging (fMRI), warranting the move forward with the large pivotal clinical trial.
The trial will be independently managed by the Applied Health Research Centre (AHRC), a methodology center affiliated with St. Michael’s Hospital, Toronto. Further information and contact details for participation enquiries can be found at https://clinicaltrials.gov/ct2/show/NCT03484143.

The Principal Investigator at St. Michael’s Hospital, Dr. Corinne Fischer, M.D., said: “In spite of substantial efforts to establish effective treatments for Alzheimer’s disease, progress has been, unfortunately, limited, and a cure does not yet exist. Although it is not conventional as an Alzheimer’s disease solution, we look forward to investigating the potential of the Vielight technology in the treatment of this difficult disease, based on promising early evidence.”

Michael Hamblin Ph.D., Retired Principal Investigator at the Wellman Center for Photomedicine at Massachusetts General Hospital and Associate Professor of Dermatology at Harvard Medical School, said: “For more than 50 years, researchers have been demonstrating the potential of PBM to treat many medical conditions.

However, large controlled clinical trials have been elusive. Vielight has been the first to demonstrate successful clinical outcomes for dementia in small early investigations, and we look forward to the findings of this pivotal trial.”

Lew Lim, Ph.D., Founder and CEO of Vielight, expressed, “A very complex disease like Alzheimer’s poses a big challenge to any researcher, and even more so for a small team like ours. Despite the solid science and strong early evidence, few were ready to ride with us. I am grateful to the courageous parties who have helped and encouraged us to get to this point of a major clinical trial. I hope that we will all be a part of something special and important in the end.”

Dr. Lew Lim to present at the Science of Consciousness Conference

On June 27th, 2019, Dr. Lew Lim will give a talk entitled, “Photobiomodulation-induced fast brain oscillations can elevate consciousness and cognition.” His presentation will take place at the Science of Consciousness Conference in Interlaken, Switzerland. This event is an annual gathering of like-minded scientists exploring new knowledge and theories on human consciousness for the advancement of humankind. Dr. Mahta Karimpoor and Dr. Hilary Au will also be present to demonstrate the novel ability of the Neuro Pro device to positively and acutely shift mental states.

Dr. Lim commented, “Our recent discoveries in the effects of photobiomodulation on the brain has given us new understanding about the behavior of the brain at different states. It is a big deal that we can induce improved mental states, virtually at will. This is a first case for a brain stimulation device to deliver this magnitude of brain response with no safety issues. The fact that the medium of modulation is the photon, which is a quantum particle, offers opportunities for extraordinary brain modulation and for new theories.”