Recently, we informed our readers of the start of our major Alzheimer’s Disease (AD) pivotal trial. This involves the use of the Vielight Neuro RX Gamma to treat moderate to severe AD. You may ask, “Why should this device even work when billions of dollars have been invested without achieving any notable success? “The answer to this bold question is several-fold. Firstly, the data from several early small studies, including those conducted by independent clinical study investigators, were strong. Secondly, the Vielight Gamma employs the use of photobiomodulation (PBM) in a novel way as a viable treatment option. It uses light of selected wavelengths to target certain areas of the brain. The mechanisms of PBM to effect changes are fundamentally different from the use of medication to treat Alzheimer’s Disease.

Dr. Lew Lim, CEO of Vielight Inc. and the inventor of the Neuro RX Gamma explains his theory of the pathways.  Dr. Lim says, “Although research efforts were directed towards the pathologies of amyloid, tau, inflammation, along with many other possible causes, one fundamental point is often overlooked: Drug development seeks out a single protein or molecule to target for modification, when in reality, many biomolecules, biochemical mechanisms and pathways are involved. These are further complicated by their cross-interactions. Today, many researchers believe that developing an effective drug should stem from addressing the disease in the early stages, before the pathways get too complicated. Still, this belief makes more sense when targeting a single protein or molecule, and particularly towards preventing the progression of amyloid pathology. However, this approach comes with a big assumption that the AD pathology is not multi-factorial, caused by a single factor, even in the early stages.”

Dr. Lim reiterates further, “This is where PBM with the Neuro RX Gamma could offer more promise than the use of single-target drug as, fundamentally, PBM is agnostic to the pathways that AD pathology takes. Instead, PBM stimulates self-correction of aberrations in the brain’s network and systems to restore homeostasis. PBM may not work all the time and for every subject, but the mechanisms and results from early studies suggest that the odds are better than what other modalities have shown.

The Neuro RX Gamma’s only intervention is to deliver pulsed near infrared light (NIR) to the default mode network of the brain and influencing numerous biochemical pathways. The net result is that PBM would affect the major factors identified with the disease.”

The complex multiple pathways are best presented by a pathway map (below) developed recently by Dr. Lim: 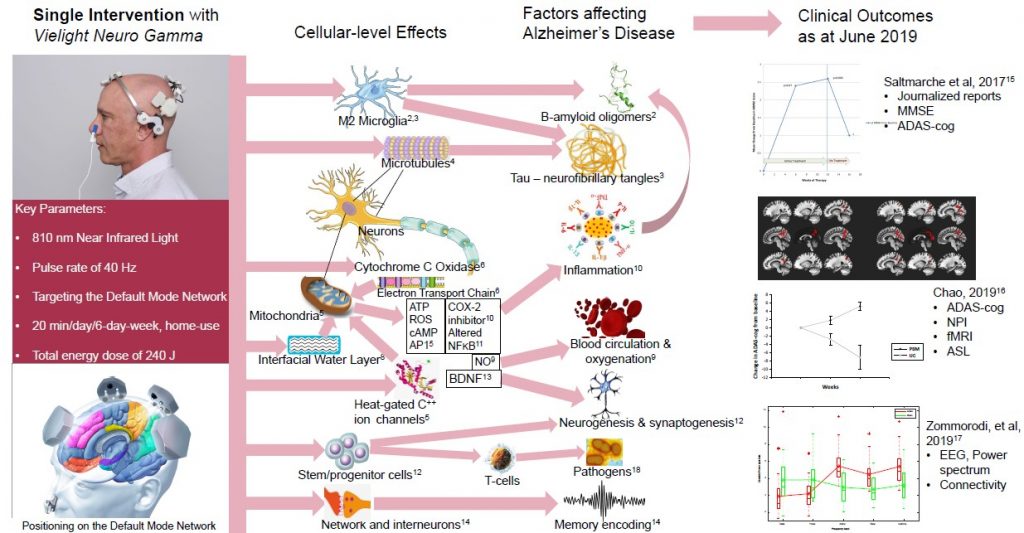 Download the map, its synopsis and the references via this link: Link

There is an increasing popular demand for a workshop by Dr. Lew Lim on how to apply photobiomodulation to improve brain functions. He has presented on numerous occasions, both online and at conferences, but never in a comprehensive program. For the first time, he is scheduled to spend a whole day at the ISNR 2019 Conference in Denver, where he plans to share his knowledge. These sessions are scheduled for Thursday, September 19, 2019. Dr. Lim will start with an 8 a.m. plenary presentation, “Neural Oscillations Induced with Photobiomodulation Could Improve Neurofeedback Outcomes”. This presentation will be followed later with a 3-hour workshop, titled “The Principles and Practice of Photobiomodulation Relevant to Neurofeedback”.

There will also be a demonstration of new Vielight products. In addition, Penijean Gracefire will deliver a plenary presentation, “Clinical Considerations of EEG-Guided Pulsed Near-Infrared Light as Feedback”.