Due to advances in medical technology, the elderly demographic is the fastest growing segment of the global population. Consequently, the side effects of natural age-related cognitive decline – such as slowed thinking, memory recall and low mental energy is an increasingly prevalent problem because of the growth of the elderly population and the negative qualitative impacts on their quality of life. 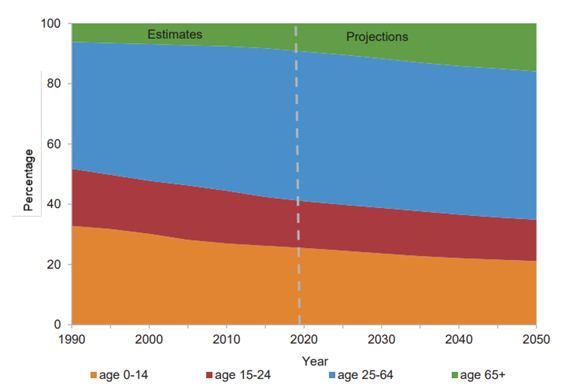 On the other hand, advancements in brain stimulation research combined with technological innovation has made longevity (or anti-aging) neurotechnology a promising proposition for  in the 21st century.

The question arises: how can brain photobiomodulation be used as a longevity biohacking tool to partially mitigate the negative side effects from brain aging, by augmenting certain physiological processes?

In this article, we’ll reference published research studies to explore how brain photobiomodulation could be used for longevity and anti-aging by improving neuronal mitochondrial function and overall enhanced holistic brain performance.

Please note that nothing known can reverse genetic aging and its negative effects, but lifestyle and technological interventions have the potential to lessen or mitigate some of aging’s negative effects.

Brain aging is a natural biological process that results in a decline in brain physiological functions. Multiple factors contribute to this phenomenon.

Additionally, a decrease in cerebral blood flow and oxygenation due to a loss in brain vascularity leads to a decline in cognitive function.[19]

What are mitochondria and neurons?

Focusing on neuronal mitochondria and the aging process

Neuronal mitochondria play key roles in regulating the brain aging process. When their function declines, the production of adenosine triphosphate (ATP) is reduced, leading to a reduction in neuronal metabolism. Additionally, a decline in mitochondrial function leads to reduced activation of signaling pathways and transcription factors that modulate the expression of various proteins.[1]

Note: Transcription factors regulate the transcription of genes— the process of copying into RNA during protein synthesis (quick fact: at least 10,000 different proteins make you what you are and keep you that way). Proteins are the building blocks of who you are.

The mechanism of photobiomodulation (PBM) is due to the ability of cells to absorb photons of red-to-near infrared light (620–1100 nm) by the mitochondria photoacceptor, cytochrome c oxidase (CCO).[2]

Note: CCO is the fourth enzymatic complex of the mitochondrial respiratory chain and it catalyzes the reaction reducing oxygen into water, which is coupled to the production of metabolic energy in cells. The mitochondrial biomechanisms of photobiomodulation

The absorption of red to NIR photons by mitochondria CCO triggers a series of cellular and physiological effects occur in the brain, also known as CCO upregulation. Figure 2: The cascade effects of photobiomodulation

Combined, these effects trigger and improve the activation of signaling pathways and transcription factors that modulate the long-term expression of various proteins and metabolic pathways in the brain.[6] Additionally, electrophysiological effects on the human brain have also been demonstrated by PBM in older people.[7, 8]

The metabolic effects of PBM in the elderly have been shown to increase cerebral blood flow (CBF) due to the increase in CCO activity, leading to an increase in brain oxygenation. Photobiomodulation of the prefrontal cortex was able to increase the resting-state EEG alpha, beta and gamma power, and more efficient prefrontal fMRI response, facilitating cognitive processing in the elderly. [8] Additionally, photobiomodulation of the Default Mode Network (DMN) has also been shown to increase cerebral perfusion due to an increase in mitochondrial activity. [9]

In addition to the above findings, PBM may be a promising strategy for improving aging brains because of its anti-inflammatory effects. [10, 11]

Brain PBM leads to a reduction in neuronal excitotoxicity

In 2022, researchers from the University of Alberta published a multi-layered study investigating the way that living cells, cellular structures, and components such as microtubules and tubulin respond to near-infrared photobiomodulation (NIR PBM) using the Vielight Neuro Alpha.

Their study showed that PBM balances excitatory stimulation with inhibition, indicating that PBM may reduce excitotoxicity which is relevant to the maintenance of a healthy brain. This study also showed that low-intensity PBM upregulates mitochondrial potential and improves physiological brain functions impaired due to trauma or neurodegeneration. [14]

Aging is accompanied by changes in tissue structure, often resulting in functional decline. The blood vessels within the brain are no exception. As one ages, a decrease in blood flow to the brain is caused by a loss of cerebral vascularity, leading to cognitive decline when neurons cannot obtain sufficient oxygen.[21] Brain photobiomodulation has also been shown to increase cerebral blood flow due to the vasodilation that occurs after the release of nitric oxide.[20] Figure 3: The beneficial effects of photobiomodulation

These findings are promising because as one gets older, mitochondrial function decreases, cerebral perfusion and oxygenation decreases[12] , inflammation increases and brain vascularity decreases.

In 2017, researchers from the Department of Psychology and Institute for Neuroscience, University of Texas at Austin found that brain photobiomodulation increases resting-state EEG alpha, beta and gamma power, promotes more efficient fMRI activity, and facilitates behavioral cognitive processing in middle-aged and older adults at risk for cognitive decline. No adverse effects were reported.

In 2019, Dr. Chao from the Center for Imaging of Neurodegenerative Diseases, San Francisco VA Medical Center conducted a study on patients in their 80s diagnosed with dementia. The NIR PBM treatments were administered by a study partner at home three times per week with the Vielight Neuro Gamma device. After 12 weeks, there were improvements in the ADAS-cog and NPI scores, increased cerebral perfusion and increased connectivity between the posterior cingulate cortex and lateral parietal nodes within the default-mode network in the PBM group. [15]

In 2021, researchers from the School of Medical Sciences, University of Sydney, discovered that measures of mobility, cognition, dynamic balance and fine motor skill were significantly improved with PBM treatment for 12 weeks and up to one year in a pilot study with 12 participants. Many individual improvements were above the minimal clinically important difference, the threshold judged to be meaningful for participants. Individual improvements varied but many continued for up to one year with sustained home treatment using the Vielight Neuro Gamma. There was a demonstrable Hawthorne Effect that was below the treatment effect. No side effects of the treatment were observed.