“tPBM has become a central element in my protocol design process. I find it to be an excellent complement to the functional support provided by neurofeedback.”
“Helping brains develop new connections which support better function is an important part of neurofeedback training. Based on emerging research, tPBM can potentially support the growth of those new pathways.”
Penijean Gracefire, LMHC, BCN, qEEG-D, Neurofeedback and tPBM provider and Neuro Pro user.

What is the place of photobiomodulation in a neurofeedback practice?

Every neurofeedback practitioner is aware that human brains prioritize resourcing and organization based on what they pay the most attention to. However, not everyone is aware that photobiomodulation can be an effective way to recruit the brain’s attentional networks for better results.

Neurofeedback and photobiomodulation are relatively new fields. For many, they are still somewhat esoteric fields of brain stimulation, training and modulation. Incidentally, both began their development in the late 1950s. The field of neurofeedback originated in California, while the field of PBM started in Hungary by accident. Furthermore, both can help the brain deal with complex issues while complementing each other.

The brain is an adaptive and self-reinforcing system, and neurofeedback, as a form of brain modulation, attempts to retrain neural response patterns. However, even the most effective neurofeedback interventions can encounter less responsive central nervous systems. Luckily, neurofeedback providers can benefit from having multiple ways to supply information to the brain. Thus, some brains will respond better to tPBM or to a combination of tPBM and EEG feedback. Therefore, having access to modern technological tools that offer a variety of viable brain-training options can improve neurofeedback’s outcomes.

Photobiomodulation has emerged as a promising therapy for ameliorating symptoms associated with both mental health and neurophysiological conditions. Early findings recorded in the literature indicate that photobiomodulation has significant clinical potential in the treatment of a number of brain-based disorders. These include, but not limited to, traumatic brain injury (Henderson, 2016), Alzheimer’s and Parkinson’s (Johnstone, 2015), improving executive function (Barrett, 2013), memory (Rojas, 2012), stroke and developmental disorders (Hamblin, 2016), and depression (Cassano, 2015).

A meta-analysis of articles examining the link between photobiomodulation and biological processes such as metabolism, inflammation, oxidative stress and neurogenesis suggest that these processes are potentially effective targets for photobiomodulation to treat depression and brain injury. There is also preliminary clinical evidence suggesting the efficacy of photobiomodulation in treating major depressive disorder, comorbid anxiety disorders, and suicidal ideation (Cassano, 2016).

Why is photobiomodulation technology synergetic with neurofeedback?

Neurofeedback is often based on scalp electroencephalography (EEG), which measures cortical activity, and doesn’t explicitly include activity from subcortical brain regions. However, a specialized transcranial photobiomodulation (tPBM) system, like Vielight Neuro Pro for example, can deliver NIR light to the brain stem. It can offer a more direct impact to lower central nervous system circuitry. This is one way specialized photobiomodulation technology can complement neurofeedback and help to improve its timeline and effects.

As a source of light, tPBM supports the brain energetically, helping it with energy supply to build new connections. Neurofeedback specialists can take advantage of this new optimized state that is supportive of learning. Furthermore, when this happens, neurofeedback training can help the brain to develop better cognitive functions.

Moreover, technically astute neurofeedback practitioners may prefer additional customization options from their tPBM device to further improve outcomes. They may want to directly impact neural network patterns, particularly if they are qEEG users. This group of neurofeedback specialists may prefer to use advanced features of a professional tPBM system. For example, features like phase synchrony/asynchrony of tPBM pulsing, or options to develop a database of specialized tPBM programs that complement neurofeedback.

What are the benefits of combining neurofeedback and brain photobiomodulation?

Neurofeedback is a form of biofeedback that is based specifically on brain activity. To put it simply, neurofeedback utilizes neuroplasticity to modulate and change the brain’s response to various stimuli. Neuroplasticity refers to the brain’s ability to adapt and change. To attain such change, the brain needs to go through training. Thus, during the training, the brain learns to adopt a new response to a known stimulus.

Interestingly, additional stimulus or stimuli may be introduced to help the brain change its response. For example, light, color, sound, and tactile sensations are some of the primary stimuli that can be used to retrain the brain during neurofeedback sessions.

Brain photobiomodulation is a way to deliver the light to the brain. Therefore, it can be used as an additional stimulus for neurofeedback. A specialized tPBM system can become a very useful and synergetic tool in neurofeedback. For example, it can act as a mechanism for priming the brain prior to a neurofeedback session. It can also open numerous opportunities for creative approaches to improving neurofeedback outcomes.

Furthermore, neurofeedback practitioners are well aware that some individuals have difficulty tolerating initial neurofeedback sessions. This can be either because of anxiety or sensory processing issues. Therefore, having an alternative intervention that is less time-intensive and doesn’t involve pastes or gels can be helpful. It can provide some early alleviation of symptom intensity until the client is more comfortable with the neurofeedback process.

Effects of transcranial PBM on the brain

Brain PBM, or tPBM, can be helpful for the brain on cellular level. It helps to support the brain by transcranially delivering the energy of the near-infrared (NIR) light directly to the neurons.

Current abundant research shows that NIR has the best penetration rate and is particularly suitable for brain stimulation and modulation. Although the research into tPBM has a long way to go, the science behind tPBM is gaining acceptance

While therapeutic uses of red light across the body are well documented, research into the effects of various light pulsation frequencies on the brain are more limited. The most commonly known tPBM frequencies are 10 Hz (Alpha) and 40 Hz (Gamma). Both correspond to the respective alpha and gamma oscillations in the brain. Most of the tPBM pulse frequency related research is focused on these two frequencies and below. Thus, the effects of the higher frequency pulse rates on the brain need more research. Modern tPBM systems offer more sophisticated options to conduct tPBM-related research.

The importance of specialized tPBM hardware for neurofeedback 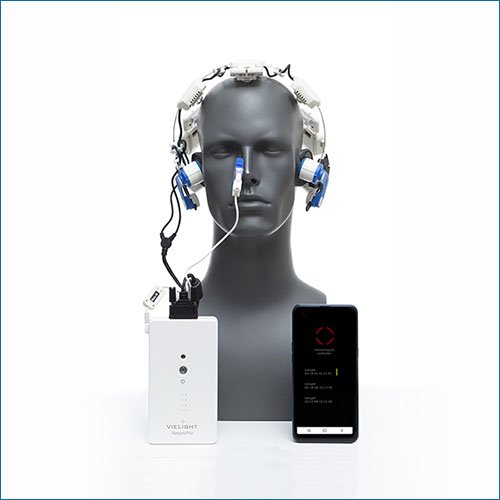 The absence of hardware suitable for extended research utilizing higher pulse frequencies has been somewhat of a hindrance. However, over the last few years, tPBM research has made significant progress opening the doors for deeper knowledge dives. Thus, both the researchers and practitioners utilizing tPBM are showing interest in studying and analyzing the effects of higher pulse frequencies on the brain.

Furthermore, new technologies and growing body of knowledge are helping to improve the capabilities of new tPBM hardware. For example, the recently introduced Vielight Neuro Pro tPBM system allows setting the pulse frequency between 0 and 10,000 Hz. The Neuro Pro’s numerous other variables can also be changed to find the best possible fit for the task at hand.

Why brain photobiomodulation should be of interest for neurofeedback practitioners?

Many neurofeedback practitioners have already discovered the beneficial synergies between neurofeedback and brain photobiomodulation. Thus, some use functional Magnetic Resonance Imaging (fMRI), others use Frequency and Power Neurofeedback, and there are other forms and options. While practitioners can use different tools for and types of neurofeedback in their practice, many principles stay common.

One form of noninvasive intervention for brain priming can be transcranial photobiomodulation. There are neurofeedback practitioners who have already discovered the important and effective synergies that tPBM can offer in their work.