Numerous studies conducted over the last two decades have shown the beneficial effects of photobiomodulation (PBM) on the body. Furthermore, a lot of research has been done over the last decade to better understand PBM’s effects on the brain. Today, there is a sufficient body of research-based evidence to conclude that PBM has beneficial effects on the brain. Various published, peer-reviewed studies provide solid support for such a conclusion.

This research has helped to uncover the cellular mechanisms of PBM. The majority of PBM studies have been done using constant light (no pulsation). However, more recently, studies have been conducted to scrutinize the effects of PBM using pulsed light. The effects of this type of PBM are of particular relevance to brain stimulation and modulation. Thus, research into brain-focused PBM, or transcranial photobiomodulation (tPBM), as a non-invasive brain stimulation modality is gaining interest.

As we noted, during a tPBM session, light can be pulsed to deliver pulsed transcranial photobiomodulation (PtPBM). The pulse rate usually corresponds to a particular neural oscillation frequency that is occurring in the brain naturally. The expectation from this is to attain additional benefits for the brain. These benefits can range, and they depend on the specific frequency at which the light is pulsing. As various neural oscillations are attributable to specific brain states, the pulsation of the light can help to induce a corresponding state. PtPBM is able to recruit brain’s attention. It can also help to induce various forms of learning, teaching the brain to react better to external stimuli. Most of tPBM-focused studies employed pulsed tPBM using either the alpha frequency of 10 Hz or the gamma frequency of 40 Hz.

Considering that different pulse frequencies affect brain differently, further research is needed to understand the scope of these effects better. There is a number of ongoing studies focused on benefits of tPBM for various applications. The range and scope of such studies are growing.

The benefits of cellular effects include those related to mitochondrial respiratory chain, as you will see below. Furthermore, studies also posit that tPBM helps to improve oxygenation and perfusion in the brain. 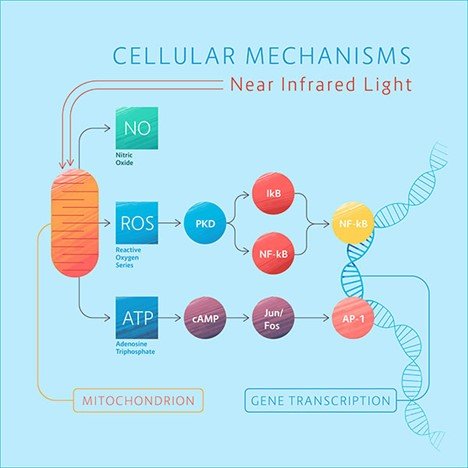 The fundamental mechanism that is thought to underly photobiomodulation (PBM) is based on its effect on Cytochrome C Oxidase (CCO), the fourth unit of the mitochondrial respiratory chain. The absorption of photons by CCO causes nitric oxide photodissociation (Lane, 2006). This event leads to an increase in electron transport activity and an increase in adenosine triphosphate (ATP), the energy source of cells.

Coincidently, there is an increase in production of reactive oxygen species (ROS) by the mitochondria. ROS play an important role in facilitating communication among the cells, as well as support of immune response. Furthermore, the release of Ca2+, as versatile second messengers, also takes place. In turn, these processes lead to the activation of transcription factors and signaling mediators (ie. NF-κB), producing long-lasting cellular effects (de Freitas & Hamblin, 2016). 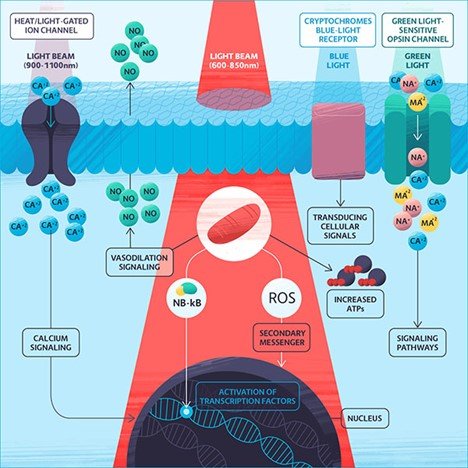 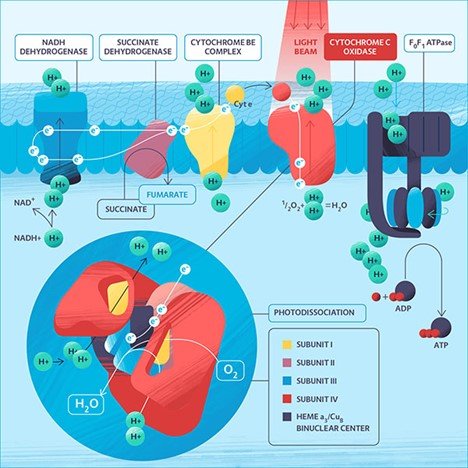 A study by Wang et al. revealed a new cellular mechanism using a longer wavelength near-infrared light. They reported activation of heat or light-sensitive calcium ion channels (Wang et al., 2017). This is important because, as crucial components of the nervous system, ion channels are necessary for the normal activity of neurons and glia.

How does photobiomodulation affect inflammation, pain, and tissue healing?

Furthermore, PBM can suppress inflammation by reduction in PGE2- levels and inhibition of cyclooxygenase-2 (COX-2) in cells (Bjordal et al., 2003). Cyclooxygenase-2 is an enzyme responsible for inflammation and pain. Therefore, the appropriate dose of PBM directed to the injured tissue could positively control pain, reduce inflammation, and expedite healing.

Although the pain control mechanisms of PBM are not yet clearly understood, several theories have been proposed. The regulation of pain (Melzack & Wall, 1965), modulation of inflammation, upregulation of β-endorphin production (Laakso et al., 1994), direct inhibition of neural activity (Snyder-Mackler & Bork, 1988), and acceleration of healing are all mechanisms by which PBM is thought to control pain.

How to maximize the benefits of photobiomodulation for the brain?

Hypothetically, to maximize the benefits of photobiomodulation for the brain, you would need a sophisticated delivery method. This delivery method would account for a number of parameters like power, light power density, duration, proximity, placement and more. An example of one such delivery method would be a PBM device that can combine and deliver the benefits related to cellular processes, and those related to stimulation of neural oscillations. These are two different pathways or mechanisms that can affect neural activity and the brain overall. However, these pathways can also be combined for a more holistic effect from tPBM.

A number of published studies provide support for tPBM’s positive effects on neural activity.  Animal and human studies show the benefits of both pulsed and continuous light during photobiomodulation. However, when it comes to brain-focused PBM, studies show that pulsed light can deliver more pronounced benefits.

Additional research will provide further evidence about the effects of different pulse frequencies. To advance such research, Vielight has developed the Neuro Pro, a fully customizable tPBM device with a pulse frequency range between 0 and 10,000 Hz. The Neuro Pro offers the inquisitive minds the opportunity to study how pulsed light tPBM affects the brain.  The Neuro Pro allows users to do that in a large range of pulse frequencies.

It would be beneficial to discuss the importance of pulsing the light at a certain frequency during PBM.

A study, published by Dr. Hamblin’s Laboratory, compared the effects of the same-dose of near-infrared (NIR) light transcranial PBM (tPBM) delivered with different pulse rates. The researchers compared three tPBM parameters. One was done with continuous wave light (no pulse), one with light pulsed at 10 Hz, and one with light pulsed at 100 Hz. All three tPBM options were delivered to mice with traumatic brain injuries (TBI) (Ando et al., 2011). The study found that beneficial effects on cognitive function were statistically better with 10 Hz tPBM than they were with either a continuous wave or 100 Hz.

Another interesting animal study came from MIT, under the leadership of Li-Huei Tsai (Iaccarino et al., 2016). The study demonstrated that genetically engineered Alzheimer’s mice ended up with reduced amyloid beta after tPBM with NIR light pulsing at 40 Hz (gamma frequency). Amyloid beta is the main component of the amyloid plaques found in the brains of subjects with Alzheimer’s disease. Notably, the researchers did not see the same effect with other pulse frequencies.

Using the data from this study, we can hypothesize that amyloid beta is attenuated in the brain regions that process pulsed light at 40 Hz. Furthermore, if we could deliver 40 Hz tPBM to certain areas of the brain, such as the default mode network (DMN), it could, theoretically, be an impactful treatment for Alzheimer’s disease.

In line with this hypothesis, Vielight Inc. is currently running a clinical trial to investigate the Vielight Neuro RX Gamma device as a treatment for mild-to-moderate Alzheimer’s Disease. Importantly, this pivotal clinical trial is double-blind, randomized, includes a placebo-controlled group, and involves 228 participants.

The default mode network of the brain is associated with the state of consciousness. Referenced by the brain’s readiness to express action or will, the DMN is responsible for the brain’s resting state. The DMN consists of the medial prefrontal cortex (mPFC), posterior cingulate cortex (PCC), precuneus (PCu), inferior parietal lobe, lateral temporal cortex and hippocampal formation. Furthermore, studies indicated that the DMN is generally divided into two subsystems: an anterior part (aDMN) and a posterior part (pDMN).

Research has shown that factors like posture and eye movement can influence the brain’s resting state. Thus, meditation and meditative states, where internal focus and a state of calm are prevalent factors, can be linked to the DMN. Furthermore, EEG readings can help to capture prevalent brain oscillations during meditative practices.

The Default Mode Network and dementia

The DMN network is of particular relevance for Alzheimer’s Disease. The mesial prefrontal cortex, the medial temporal lobe, and, particularly, the hippocampus (the nodes of DMN) are involved in mediating episodic memory. In Alzheimer’s Disease, impairment in episodic memory is one of the first symptoms observed (Greicius et al., 2004). Given the significant role that the DMN plays in the pathophysiology of Alzheimer’s Disease, it represents an important neuroanatomical target for treatment. Targeting it with transcranial photobiomodulation is a non-invasive option that is being studied.

At this point, you may be interested in looking at study examples that used NIR tPBM on DMN locations. A tPBM study on Alzheimer patients by Dr. Linda Chao demonstrated some of the benefits of tPBM. The study presented post-treatment improvements in Alzheimer’s disease scores, increased cerebral perfusion, and increased connectivity (Chao, 2019). Dr. Chao performed tPBM using Vielight Neuro Gamma devices with LEDs placed on the head, over the DMN location (Fig. 1). 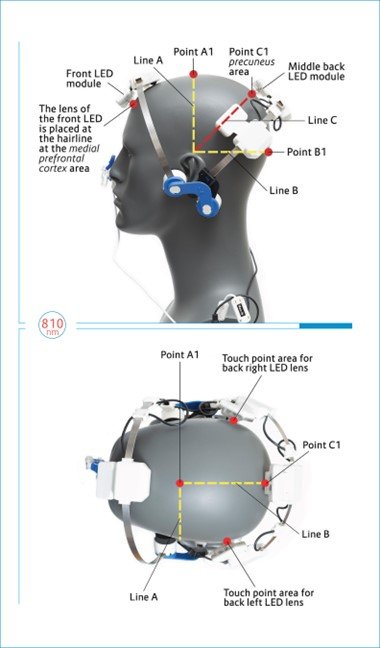 Practitioners who employ neurofeedback in combination with tPBM observed interesting effects of brain stimulation with pulsed tPBM. For example, with higher wave frequencies PtPBM, energy levels, focus, and arousal increase, while bodily awareness decreases. These observations point to a possibility that higher frequency PtPBM could be useful in attaining deeper and higher meditative states.

Studies suggest that long-term meditators have higher power in all wavelength ranges of brain oscillations. However, it is the higher gamma frequency range increase that is of particular interest, because it helps to attain higher level meditative states.

To better understand the effects of tPBM on meditative states, Vielight is working on a meditation study. This study will employ the Vielight Neuro Pro device. The Neuro Pro can be set to pulse the NIR light at a variety of frequencies, while a number of important tPBM variables can be customized. This customization flexibility is expected to help to investigate what effects various PtPBM protocols can produce on meditative states.

It is important to note that research into the effects of transcranial photobiomodulation on the brain has progressed significantly. Nevertheless, there are still many questions that need to be answered. Meanwhile, tPBM is garnering attention of more and more researchers and reputable research institutions worldwide. The depth and breadth of knowledge about its effects on the brain is expending. Thus, the understanding of tPBM pathways is growing, and it is very possible that new ones will be discovered.